Everyone knows that airplane coffee tastes bad, but few people ever ask why. Here are the reasons. 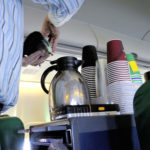 Water You know that coffee is 98% water. At home you use high quality filtered water or bottled water to brew your beans. Airlines get their water from large mobile tanks that pull up to the plane and pump it into the plane’s holding tanks. The holding tank water is used for all water on the airplane including the lavatories. The water is tap water with chlorine and other chemicals from the local water district. In foreign countries, this is the same water that was in your hotel sink that the guidebook told you not to drink.
In 2009, the Environmental Protection Agency required airlines to test their on board water tanks for coliform bacteria at least once a year. In 2012, the Agency sampled water tanks on domestic airplanes and found coliform bacteria in 12 percent of the water tanks.
There are no EPA guidelines for the mobile tanks or the connecting hoses, which are rarely cleaned. Before and after they pump water into the planes the mobile tanks and the hoses sit on hot tarmacs building up bacteria, mold and fungus.
You can’t make good coffee with bad water
Brewer Cleanliness You know that drip coffee pots build up mold and fungus in the coffee lines. So every few weeks you brew white vinegar though the coffee maker to kill the mold and fungus. Airplane coffee makers are also drip coffee makers. They have hot water tanks in them and pipes to move the water into the brewer. There is no EPA requirement for cleaning airplane coffee brewers. Airlines do not clean mold and fungus out of their brewers. Moldy coffee has an off taste that most people kill with sugar and cream
You wash out your coffee brewer carafe every time you use it. You add soap or coffee cleaner to the water to rinse out the coffee
oils. You know that coffee oils turn rancid quickly and will affect the flavor of the next pot. Most airlines do not provide cleaning materials or procedures for airplane coffee carafes. The best that most carafes get is a quick water rinse.
Ground Coffee Pods You know that fresh ground coffee tastes better. Even in sealed bags ground coffee stales faster than whole bean coffee. Ground coffee in sealed bags should be brewed within a few weeks of being ground.
Airlines buy their ground coffee by the caseload. There do not control when the coffee was roasted or when it was ground. Ground coffee on supermarket shelves has a use by date that is nine months from the date of roast. There is no use by date for airplane coffee. Stale ground coffee doesn’t taste bad, it’s just tastes like brown water with caffeine in it.
Temperature You know that great coffee is brewed at 200 F plus or minus 5 degrees. Airplane coffee is brewed in pressurized cabins that are equivalent to 6000 to 8000 ft above sea level. The boiling point of water at 7000 feet is 198.5 F, which is within the right range. However, just like your home drip brewer, airplane coffee brewers have thermocouples that wear out. As the thermocouple wears out the water temperature gets lower and lower. No one checks the water temperature on an airplane coffee brewer.
Decaf Coffee Making lots of pots of coffee takes time. When the airline offers regular and decaf it takes more time. A shortcut used by some flight attendants is to just make decaf coffee and serve it as both regular and decaf. So, if you miss the buzz on your next airline cup, you now know why.
There aren’t any good solutions. The airport waiting area coffee isn’t much better. You can’t bring a cup of good coffee through TSA. You can’t whip out a french press and an immersion heater and brew your own in the plane lavatory. (You could, however, unless the pilot is a coffee nut like you, you will be talking to the FBI.) You are stuck with either alcohol, canned soft drinks or bottled water.

Hula Daddy Kona Coffee LLC is a boutique farm in Kona, Hawaii that grows, processes and roasts its own current crop coffee beans. We grow 7 different varieties of coffee and process them using 4 different methods. We roast date every bag of our coffee.