Two food scientists in Oregon have announced that they have created a new beverage, Atomo, 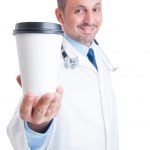 which tastes like coffee but isn’t bitter or acidic. It will be released in 2020. The scientists refuse to say what compounds they used to create their coffee substitute other than it doesn’t have chlorogenic acid and it does contain caffeine. They also claim that sincethe U.S. Food and Drug Administration does not have a “standard of identity” for the word “coffee”, they can call their beverage coffee.

Is this the future for coffee? Will 1984‘s “victory coffee” substitute become the new standard? Will we wind up like Winston in 1984 who gets a package of contraband coffee and exclaims “It’s coffee”, he murmured, “real coffee“? Maybe the future is the “caffeine solution” drink of Brave New World. We don’t have to wait for Atomo, we can drink a coffee substitute drink offered by Soylent Green called Soylent Café (unless, of course, you remember that in the movie “Soylent Green is People!”)
It is amazing how many different coffee substitutes have been created. Coffee beverages have been created from chicory root, wheat, wheat bran, garbanzo beans, barley, rye, carob, maya nut, dandelion root, figs and acorns. Substitutes  have been created for hundreds of years for a number of reasons most notably religion, health and war.
Religion
No one knows how or when coffee was first discovered. However, there is an apocryphal story that it was discovered by an Abyssinian goatherd who ate the ripe beans and then took some to the Iman in his village. The Iman declared that the beans were from the devil and threw them into his fireplace. As the beans roasted the servants scraped them from the fireplace, ground them and poured hot water over them. They shared the brew with villagers coming for evening services. The Iman was amazed when none of the villagers fell asleep during his sermon. The Iman then declared that he had discovered beans from God and ordered that the brew should be served before every sermon.
There is another apocryphal story that Catholic clerics in the 17th century wanted to ban coffee because it was exported from Moslem counties and was the “devils drink.” Pope Clement VIII was asked to taste coffee and then to ban it as sinful. Instead he decided it was delicious and he blessed it so that the devil couldn’t have it.
Coffee is banned by the Seventh Day Adventist and Mormon religions. (Actually the Word of Wisdom of the Church of Jesus Christ of Latter Day Saints only bans hot beverages. So Mitt Romney, who was criticized by zealots during his presidential campaign for drinking Diet Coke, could also probably drink cold brewed coffee, if he wished.)
Health
For their entire existence coffee and caffeine have been classified as unhealthy. The list of alleged adverse medical effects is huge: heart disease, stomach ulcers, hypertension, insomnia, heartburn, gout, fibrosis, incontinence, impotence, headaches, infertility, miscarriage, early death, anxiety, depression, panic attacks and diabetes. One myth still prevalent in the United States is that coffee stunts the growth of children.
One of the most fervent advocates in the United States against coffee was C.W. Post who founded Post Cereals. In the last 1800’s and early 1900’s Post gave speeches and ran ads in magazines and newspapers listing the negative effects of coffee on the human body. Post became a millionaire vilifying coffee and selling his alternative wheat based drink, Postum.
All of the claims that coffee is unhealthy have been debunked. If fact, major studies indicate that drinking up to four cups a day can decrease the chances of a number of serious illnesses.
War
Coffee substitutes have often been used during wartime shortages of coffee beans. Chicory root coffee was used by the French during the Napoleonic wars, by American colonists during the Revolutionary War and by Southerners during the Civil War. Postum was popular in the United States during WWII when coffee was rationed.
So, if the future is coming, you should stock up on real coffee before it becomes obsolete.